I am at the doctor’s office using the handicap accessible washroom. I’m seated on the toilet with my right hand holding the grab bar and I’m stuck. I have no idea how I’m going to get up. I consider calling out for help and wonder if people in the waiting room will be able to hear me. This has happened before; I regularly get stuck in accessible washrooms.

There is a knock at the door. A voice asks, “Rita, how are you doing in there?”  “I’m stuck,” I reply. The voice responds,”Let me know if you need any help.”  I say nothing; I’m used to doing things by myself. I’m too tired to ask for the help that I need and too tired to explain what I need.  So I set my resolve to try again. I manage to lift myself up, but my feet can’t bear my weight and I drop back down. Alone and facing my wheelchair, I want to cry.

A voice whispers, ‘you can’t choose your problems,  you can only choose the solution.‘ Surprised by the clarity of the voice in my head, I repeat it with confidence. I remind myself that I’m at the doctor’s office and it’s time to get up. I resolve to use what I learned at physiotherapy. I know which muscles to engage and how to concentrate and breathe into  movement. I raise myself off the seat. First try, I get a little bit higher. Second try, I feel steadier. On the third try, I’m on my feet. I swivel the feet slowly and carefully. I switch hand positions, from grab bar to wheelchair and dump myself down. Finally, I’m sitting on my wheelchair. I resolve to do my exercises regularly; if only to get myself off my derrière with ease. Next time…

The image above is one of my most favourite paintings, “A Peaceful Waterfall” by Toronto artist Joanna Strong. See more of her work at http://joannastrong.com/

I think of her often these days. I recently saw a picture of myself that immediately brought her to mind. I am sitting in a wheelchair with my knees resting against each other. I am smiling and enjoying the company around me on a very social evening. What made me think of my grandmother? Even when she was in her 90s and used a wheelchair to get around, she was always ready to enjoy herself. With her pretty, high cheekbones and mischievous eyes, she was patient and clever. She taught me a lot. How to cook a good spaghetti sauce. How to be grateful for the small things in life. How to appreciate poetry.

I knew her for a long time, from the time I was born until she passed away when I was in my 30s. At different stages in my life, I got to know different sides of her. A charming, mischievous and open-minded artist, she worked very hard. She was unassuming, but expected nothing less than excellence. She loved and forgave. As I watched her age and grow more frail, while I grew stronger, I learned that the physical reality of her presence did not reflect the essence of who she was.

I remember when we were living in Ontario in the 1970s, she and my grandfather were taking English as a second language classes. She showed me an essay she had written for the class. She explained she had to choose a topic from a few the teacher had given. She chose to answer the following: “Is it better to have loved and lost, than never have loved at all?” I was young and remember reading the paragraph, but not quite understanding it. She explained to me that it was better to have loved and lost. I remember looking at her wide-eyed, thinking to myself: “Si Nonna, if you write it, then it must be true.” I think back now of all the stories she told me and realize I had absorbed this: there will be pain, frustration and discomfort in life; joy is mine to find. 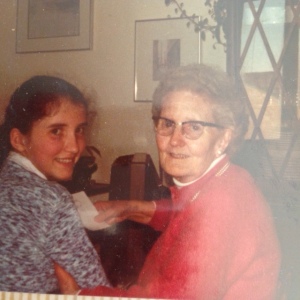 The wheelchair sat in the front hall, parked by an electrical outlet, where it’s battery could be recharged. She gave it a wide berth when walking past, grimacing. She even hissed at it once, and walked away.

Correction: she doesn’t really walk anymore. Leaning heavily on her walker, it’s more of a trundle. “Okay then” she said, “the next sunny day, I’ll take you out.” She called her friend and neighbour, asking her out for coffee and mentioning that she’ll need some help holding open doors and testing her new vehicle on the sidewalk.

Her friend arrived and they chatted as always. Preparing to leave, she strapped on a fanny pack and belted herself in her new wheelchair. Then she tested the stick-shift controls. Her friend opened the front door of her apartment and they headed to the elevator. Backing out of the elevator will take practice. Eventually she learned that doing a 360 turn in a tight space is easier than backing out. The friend opened the door to the building entrance and the door to the street. They were off! She tested various speeds, finding out which speed left her friend out of breath, and, which was a leisurely stroll. They tested ramps: the buildings, the sidewalks, and, finally the ramp to the coffee shop. In her wheelchair, she pulled right up to the cafe’s table and her friend bought the coffees. The accessible bathroom was especially nice, with its easy to open, non-weighted door. The sink and grab bars were well-placed. The paper towels and soap were all reachable from the chair. The coffee was good too. They sat and chatted of their kids, who had met in preschool and who were now good high school buddies.

While the sun was still high in the sky, they headed home.

Satisfied with the test and cheered by the sun and good conversation, she thanked her friend. Her friend had made sure she got through all doors until she was safely home. Finally home, she parked her wheelchair and happily grabbed her walker. Stretching out her calf muscles and standing on tippy toes, she gratefully moved her leg muscles. Wonkily walking to her room, she laid down on her bed and napped soundly.

“The Dragon of Despair Faces its Enemies” is an oil painting by Joanna Strong. To see more of Joanna’s artwork please visit http://www.joannastrong.com 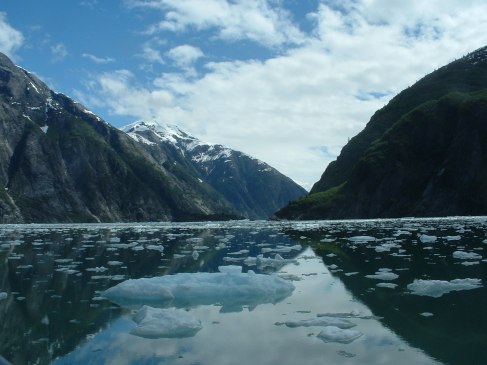 “We had better look into that MS thing,” I told my family doctor. I explained with fear in my voice, “something is happening now!”  The tingling in the tips of my left hand had crawled all the way up my arm. The left arm was growing heavier and I was losing co-ordination and sensation in my fingers. I felt that a band of elastics was tightening daily around my rib cage. Within three days of the visit with my physician, I was being scanned by an MRI. The neurologist and family physician confirmed a diagnosis of relapsing-remitting MS. There was the tell-tale scar tissue in my brain. I was then given steroids intravenously and I continued with a dosage of oral steroids. I rested as much as possible. Although, can that be right? I can’t remember how I managed to rest. Taking steroids is like pumping caffeine directly into your veins. It was May 2001. My youngest child was two years old and her older brother and sister were four and six years old. My two teenaged step-daughters were with their mother in another province. My husband had a busy job. We must’ve hired a babysitter.

I only told a few people at the time. My husband went into a state of shock. I must’ve phoned both my father and my mother right away. We told a few friends. I remember telling one friend, who has since become one of my “MS buddies”.  She had been diagnosed with multiple sclerosis decades earlier, and, when I knew her got around exclusively in a wheelchair. Always an elegant and forthright woman whose friendship I enjoy; when I told her of my diagnosis, I whispered it to her in a hushed and saddened voice. She replied, “You’re destined for the wheelchair, girl”, as if she was inviting me to an exclusive club, that I didn’t to join. Was she implying that it wasn’t a bad thing? I was taken aback and disgruntled. I wasn’t ready for this! But she wasn’t going to let me feel sorry for myself. Her remark ensured Reality slapped me in the face. But, I had been avoiding the reality for quite some time and would happily continue to do so for years. I wasn’t ready to reconfigure myself into someone who needed a wheelchair.

(A photo I took of Tracy Arm fjord in Alaska) 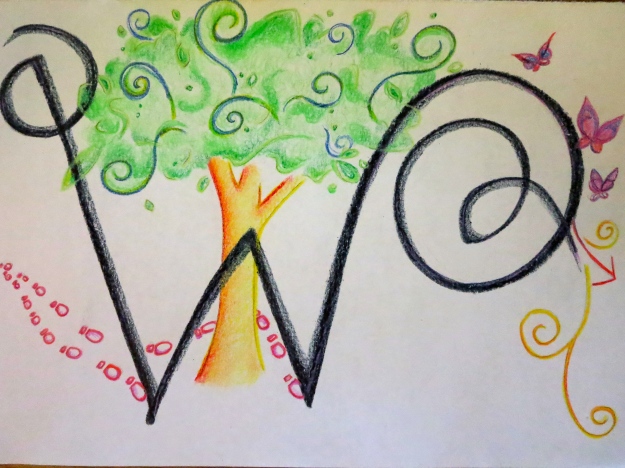 This poem is brought to you by the letter ‘W’

Lifting both appendages high:
the left waves
a good-natured farewell
as the right
points toward the exit.
‘W’ walks sideways,
crab-like on tips.

Whimsical:
flipped upside down
‘W’ turns into ‘M‘
for memory.
Upward swinging arms
hang upside down.
Hugging the ground
with 3 points of contact:
past, present & future.

The chair comes
next
with the letter
‘X‘.